You say Warhawk, I say Tomahawk...
Before I start I should point out an elementary faux-pas that I made. I thought it would be nice to buy the other Curtiss Hawk based kit in Airfix's catalogue, the Curtiss Hawk 81-A-2 (#A01003) to go with my Christmas Curtiss Tomahawk IIB (#A55101) Both models sport the famous 'Shark Mouth' nose art and I liked the idea of a matched pair of 'sharks'...

However...It turns out that they are actually both (nearly) the same aircraft! Apparently - so I am told - the Curtiss 81A-2 is simply the manufacturers designation for the export model of what the USAAC called the P-40B model and what the RAF called the Tomahawk IIA (Tomahawk being the Curtis name for export models). The main difference between the Tomahawk A and B models was improved self-sealing fuel tanks which would not be visible in the kit form.

So don't make the mistake I made and think they are totally different versions of the P-40, from the Airfix model point of view they aren't! (I checked, they are indeed the same sprues!)

Confused? I was, but if you really want your brain to explode then consider this - Airfix have released the 81-A2/Tomahawk IIB kit as a Warhawk P-40B with USAAC Pearl Harbour decals in a 'Dogfight Doubles' set with a Mitsubushi Zero! So they are using the same kit for three - albeit very closely related - variations of the Curtis Hawk series of fighters! 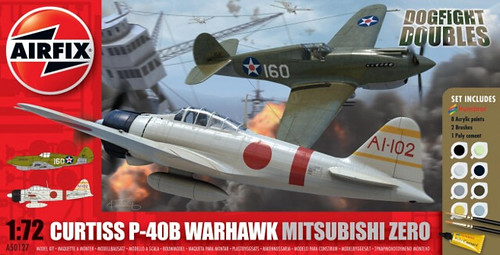 Research - Readying for the build
Right, variant confusion aside the first job is to start researching my build. I started with the Tomahawk as I am currently reading Derek Robinson's 'A Good Clean Fight' (boy's own adventure in North Africa in 1942 for grown up chaps).

Now, I've already mentioned in an earlier post that I have collected together some very nice book reference about the real P-40 series of fighters, of which I can thoroughly recommend Osprey's series of books on the fighter. But the most useful research I conducted was to see what other people had done with the Airfix Hawks, and we start with a real beauty...

The above example - by 'McCoy' - is absolutely beautiful and something I could only aspire to in my wildest dreams. But it does give me a reference point to work towards and has some excellent touches that I may well wish to incorporate. See the full photo post here: Kiwimodeller - Curtiss P-40B Tomahawk IIA 1:72 (Airfix A01003 + Eduard #73427 PE).

And finally, here's a lovely build by 'Yak Face' on Scale-Models.co.uk of the actual Airfix Tomahawk IIB. This is a nice illustration of an 'out the box' build of the Airfix kit...

She does look vert smart. But this all does fill me with a little apprehension as I have a lot to live up to as this subject has - as you can see - been done very comprehensively and by far better modellers than I. But, who dares and all that!

Out the Box or Accurised?
The last part of my preparation was to consider how much work to put into this kit. I don't mean how sloppy I intend to build this but rather to what extra lengths I might go to 'super accurise' the model by adding additional third-party accessories. As well done as this Airfix kit is said to be there are certain aspects that aren't - apparently - quite up to snuff as far as the purists are concerned. 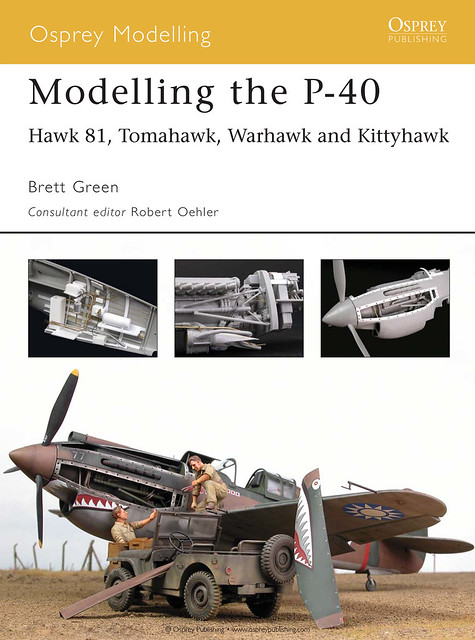 Left: Osprey's 'Modelling the P-40' gives many examples of how basic models can be refined with third-party accessories in order to make more accurate variations of the Hawk series.

To be honest, this shouldn't bother the beginner or intermediate modeller - the Airfix Tomahawk looks great to me (bearing in mind what I remember of the old Airfix Kittyhawk), but display modellers and competition modellers might want to take the basic kit to the next level.

It didn't take me long to track down a plethora of add-ons and up-grade kits specifically for the Airfix Tomahawk, and this says to me that it is a kit worth accurising. A quick search over at Hannants.co.uk for 'P-40' at 1/72 scale will reward you with several pages of Warhawk and Tomahawk bits and bobs of all types - resin and photo-etched parts, decals, internal and external up-grades and even vacu-form canopies.

In the end, as tempting as these parts would have been I decided that there was a greater appeal to simply making an Airfix kit as it was intended. It's been many, many years since I made an Airfix aircraft kit and the idea of recapturing my boyhood pass-time out-weighed any desire to make a 'better' Tomahawk. So this will be an 'out the box' build.

PS... I meant to add that for a laugh I popped all the relevant possible third-party upgrades that you could add to the Airfix P-40B into the Hannants shopping cart - the total came to forty-four Pounds! Ten times the price of the original Airfix kit itself.

What next?
Well, that's all my preparation thoughts laid out so it's on to the box review. And at this point I will get a chance to compare both of Airfix's Hawks side by side...Are they really identical?