I'd already started to work out how to model Finnish army figures while I experimented with my gun emplacement project (artillery crew). Luckily I have managed to get hold of a varied selection of reference material to help me plan out how to model these figures.

Primarily I rely on Osprey's 'Finland at War 1939-45' (Elite 141) and the web site 'The Military Tunics of Finland 1918-1945', both of which give you a good idea of the uniforms and equipment in use by the Finns throughout the war, summer and winter. In my case I was particularly interested in the summer dress of around 1944.

In my previous post on making the artillery crew (see link above) I talked about the choices I had for the figures and how I plumped primarily for the Plastic Soldier Company Russians in Summer Dress, which I mixed in with some parts from other figures for variety. I am now at the stage where I am painting my first four test figures.

Painting Finnish uniforms
I chose to prime my figures using Humbrols aerosol primer, which just happens to be the perfect light grey for the Finnish army's summer tunics. I know some people prefer to base coat figure using black, but I tried that and it played havoc with my eye-sight! My much prefer grey as an undercoat.

Then I painted the basic coats of the major items using the following Vajello acrylics:

Accessories will need some browns and tans for webbing items before I start the shading. Where I substitute the German helmet for the Czech or Italian helmet I will paint these a dark olive drab and the soft M36 field cap (similar to the Germans') is the same light grey as the tunic. 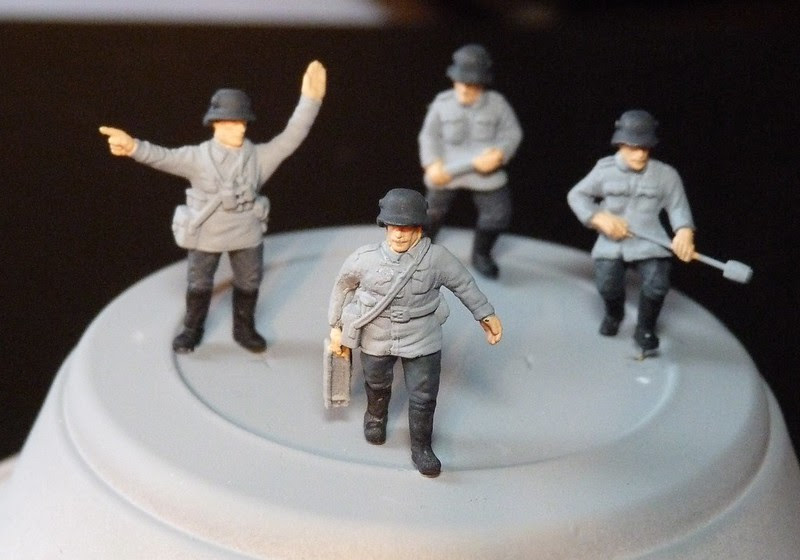 Next: Detailing and shading.