Description: The is a comparative review of two similar products, the Revell German Artillery set (£4.99 from ModelZone.co.uk) and the Armourfast LeFH 18 105mm Howitzer set (£7.50 from Armourfast). 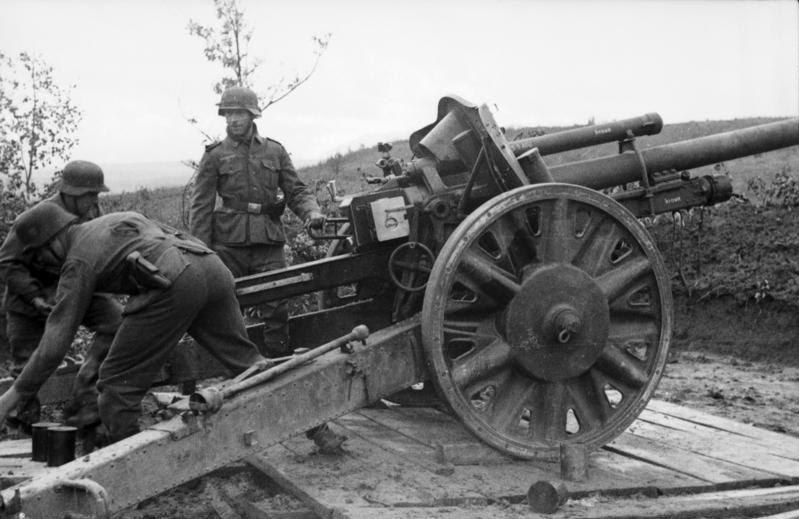 The 10.5 cm leFH 18 was the standard divisional field howitzer used by the Wehrmacht during the Second World War. It was designed and developed by Rheinmetall in 1929-30 and entered service with the Wehrmacht in 1935. Generally it did not equip independent artillery battalions until after the Battle of Stalingrad in 1943. Before 1938 the leFH 18 was exported to Hungary and Spain. 53 were also exported to Finland, where they were known as 105 H 33. [Source: Wikipedia]

Of course it's the 'exported to Finland' that caught my eye and why I was eager to get my hands on Armourfast's newly released LeFH18 gun set. However, I also knew that I wanted a gun tractor of some sort and additional crew, so while looking for these I came across Revell's German Artillery set on sale at a local store. this turned out to be a very interesting find and unexpectedly inspired this comparative review.


The Revell WW2 German Artillery set (02515)
The main attraction for me was the inclusion of a full horse drawn limber, two LeFH18 guns and a total of seven gun crew and eight mounted crew. Though to be honest, I didn't expect very much from a set of 'soft' plastic figures my experience of these sort of 'toy soldiers' haven been coloured by memories of the Airfix 1/76 soldiers from my childhood.

In fact instead of buying a cheap way of padding out my Armourfast model I found myself in something of a quandry as the Revell set had much to commend it, and in some ways it was slightly superior to the hard plastic Armourfast gun set. 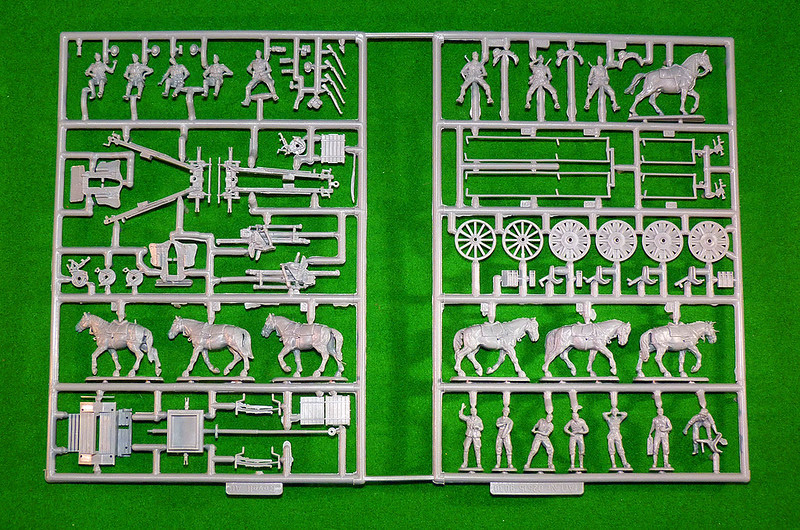 I was surprised at just how much you get in this relatively cheap box. Not only do you get the main items I mentioned above but also Revell gives you a range of smaller items which compliment the set - like ammo boxes, small arms, helmets, etc. The whole thing is wonderfully designed to allow you to put together a well furnished diorama based around one gun in the firing position and one gun being towed. You don't really have to buy any other accessories to dress up the scene. The figures themselves are unexpectedly pleasant as well, creatively and well carved in very realistic poses. The horses in particular are life-like and intricately detailed for cheap plastic figures. The commander's horse is especially natural looking with a very haughty stance.

The guns and limber are perhaps less well put together, the guns are what you might expect from soft plastic. They are a bit vague and not at all solid looking (there is a little bend in the barrel of course). 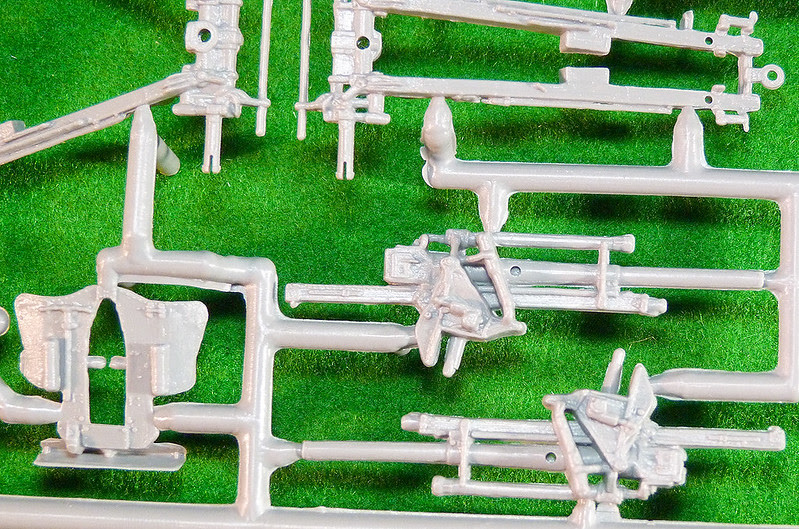 I am not an expert - by any stretch of the imagination - on WW2 German artillery, but I did notice by comparing the Revell gun with the Armourfast that the gun wheels are different in this set. They seem to be some sort of pressed steel semi-solid type, rather than the more traditional wooden spoked type that Armourfast has included in their set. Both are authentic and were used and can be seen in period photos, so I cannot say which is right or wrong, they may both be correct.

If I have one niggle - aside from my prejudice against soft plastic - I would say that something about the firing gun crew just doesn't sit right with me. They appear to be just a little too lanky for my liking - like they had all been stretched on a medieval rack! 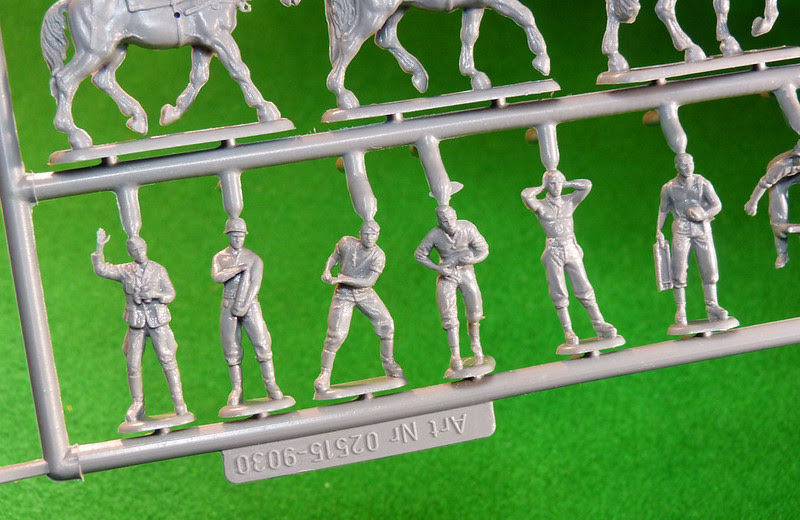 Certainly they are superbly modelled, with anatomically correct physiques and natural looking poses, but they just seem too darn tall to me. Strangely the riding crew don't seem to suffer from this unnatural tallness.

The Armourfast LeFH18 105mm Howitzer
Armourfast's latest product is a departure from their usual line in WW2 themed military vehicles, it's their first artillery piece. As usual with Armourfast quick builds the box contains two identical sprues so you can build two instances of the model. 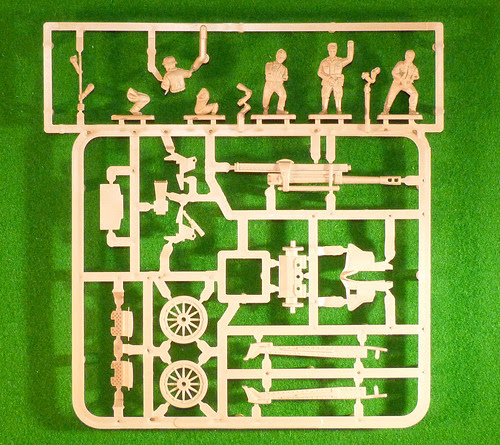 Altogether the gun consist of 13 component parts, crisply moulded in a tan coloured hard plastic. as with all Armoufast's models the detail is spartan and simplified and the principal goal is to get a finished model up and running as quickly as possible for the war gamer.

As well as the gun itself there is also a four man crew, which I guess is the minimum one might efficiently operate the gun with, but is also probably a concession to war gaming conventions (whereas the Revell crew of seven reflects a more historically accurate complement needed for a display diorama). But the set does not include any additional accessories, like ammo crates.

I know Armourfast's philosophy is 'less is more', and keeping the number of parts down is conducive to this - and anyway, vehicle modellers will have their own ideas what accessories they might want to add - but ammo cases and spent casings are kind of intrinsic to artillery and a couple wouldn't have gone amiss. But boxes and cases and shells are easy enough to make, so it's a minor thing.

Perhaps more important is the quality of the crew. Armourfast doesn't usually do figures for it's models as far as I know, but they do do a German Army mortor crew set which I am told is rather nicely done, so they have at least some experience of working with the human form. So it's interesting to look at their gun crew because they seem to have given us completely the oposite of what Revell gave us. 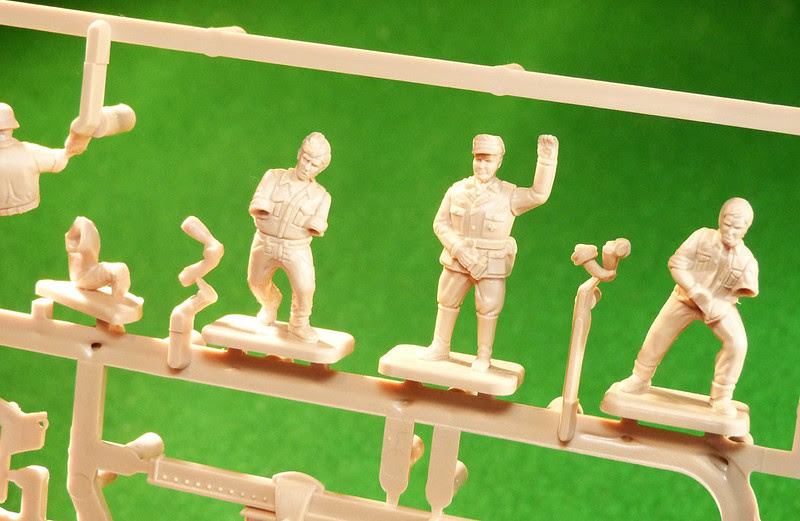 Where I considered the Revell crew to be slightly too spindly and tall the Armourfast characters look as if they have been indulging in rater too much strudel!

The other issue I have with the figures is the poses, unlike the Revell crew's delicate and naturally relaxed poses the Armourfast crew are a little staged and laboured. Between the stoutness of the bodies and their fairly ridged stances this crew seem a little at odds with other 1/72 figues I have, to the point where they wouldn't actually fit in with others you might have collected. 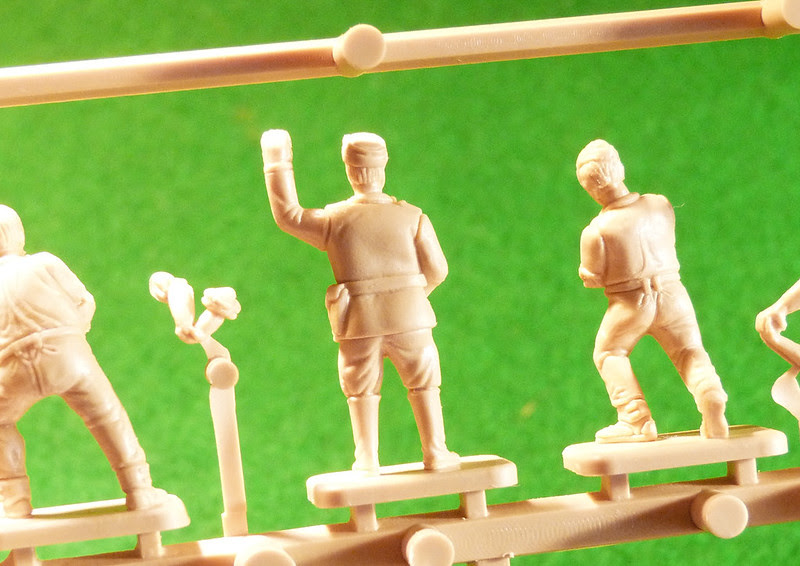 I know styles of figures vary from one manufacturer to another, but these seem to represent an extreme which might be hard to mask by hiding them in the ranks of your other figures. I do think they would stand out. This is a real shame as the crispness of the harder plastic means that there is some lovely detail on the uniforms and the faces of the figures are quite expressive, even more so that the Revell characters in fact.
----------

Well, that's what you get in the boxes - aside from some assembly instructions in the Revell box (and a painting guide on the back of the box) and assembly instructions on the Armourfast box - and so far it's a mixed bag. Superficially you could say Armourfast has the good gun and Revell has the good crew and accessories - the perfect mix and match, but that would be a bit of a simplification and somewhat premature.

In the next part of this review I put together the guns and figures and we shall see how they pan out.

NEXT: The construction phase